More than a decade ago, Gwyn Prins and Steve Rayner characterized climate policy as an “auction of promises” in which politicians “vied to outbid each other with proposed emissions targets that were simply not achievable.” For instance, among Democrats competing for the presidency in 2020, several, including Joe Biden, have committed to achieving net-zero carbon dioxide emissions by 2050. Candidate Andrew Yang bid 2049, and Cory Booker topped that by offering 2045. Bernie Sanders has offered a 71% reduction by 2030.

One reason that we see this “auction of promises” is that the targets and timetables for emissions reductions are easy to state but difficult to comprehend. Here I’ll present what net-zero carbon dioxide emissions for 2050 actually means in terms of the rate of deployment of carbon-free energy and the coincident decommissioning of fossil fuel infrastructure.

To conduct this analysis I use the BP Statistical Review of World Energy, which presents data on global and national fossil fuel consumption in units called “million tons of oil equivalent” or mtoe. In 2018 the world consumed 11,743 mtoe in the form of coal, natural gas and petroleum. The combustion of these fossil fuels resulted in 33.7 billion tonnes of carbon dioxide emissions. In order for those emissions to reach net-zero, we will have to replace about 12,000 mtoe of energy consumption expected for 2019. (I ignore so-called negative emissions technologies, which do not presently exist at scale.)

Another useful number to know is that there are 11,051 days left until January 1, 2050. To achieve net-zero carbon dioxide emissions globally by 2050 thus requires the deployment of >1 mtoe of carbon-free energy consumption (~12,000 mtoe/11,051 days) every day, starting tomorrow and continuing for the next 30+ years. Achieving net-zero also requires the corresponding equivalent decommissioning of more than 1 mtoe of energy consumption from fossil fuels every single day.

The concept of an mtoe is pretty hard for anyone to get their head around. So let’s put the mtoe into a more comprehensible unit, a nuclear power plant and specifically the Turkey Point Nuclear Generating Station in Homestead, Florida. The amount of energy reflected in 1 mtoe is approximated by that produced by the Turkey Point nuclear plant over a year.

So the math here is simple: to achieve net-zero carbon dioxide emissions by 2050, the world would need to deploy 3 Turkey Point nuclear plants worth of carbon-free energy every two days, starting tomorrow and continuing to 2050. At the same time, a Turkey Point nuclear plant worth of fossil fuels would need to be decommissioned every day, starting tomorrow and continuing to 2050.

I’ve found that some people don’t like the use of a nuclear power plant as a measuring stick. So we can substitute wind energy as a measuring stick. Net-zero carbon dioxide by 2050 would require the deployment of ~1500 wind turbines (2.5 MW) over ~300 square miles, every day starting tomorrow and continuing to 2050. The figure below illustrates the challenge. 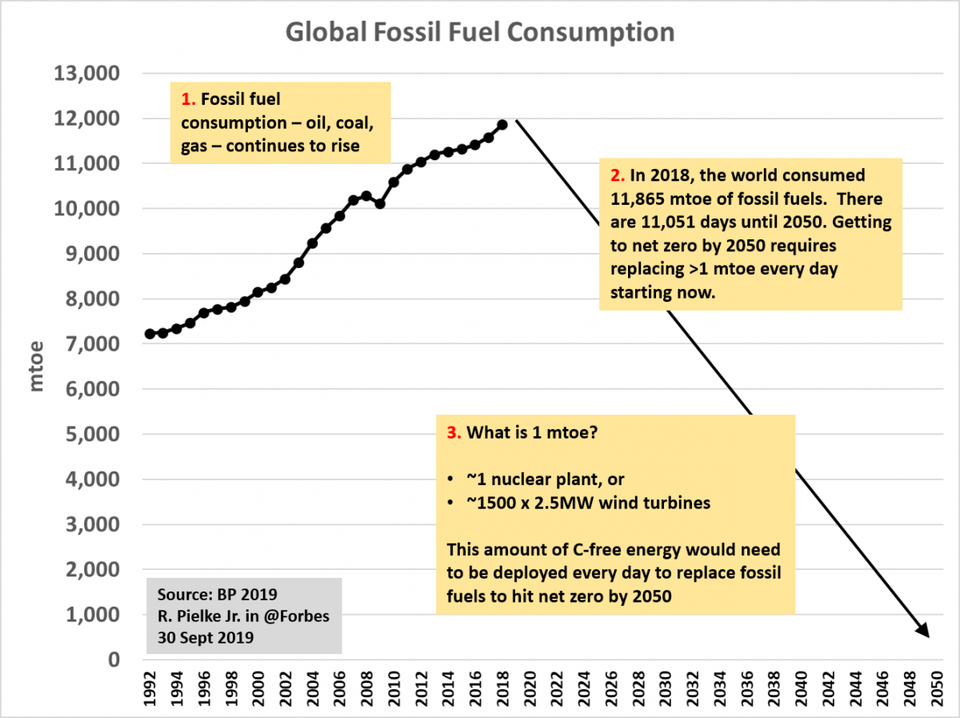 The scale of the challenge to achieve net-zero carbon dioxide emissions in 2050.

Of course, in this analysis I am just looking at scale, and ignoring the significant complexities of actually deploying these technologies. I am also ignoring the fact that fossil fuels are the basis for many products central to the functioning of the global economy, and eliminating them is not nearly as simply as unplugging one energy source and plugging in another.

We can also perform this same analysis for the United States, which according to BP consumed more than 1,900 mtoe of fossil fuels in 2018. To reach net-zero by 2050, the US would need to deploy one new nuclear power plant worth of carbon-free energy about every 6 days, starting this week, and continuing until 2050. This does not include possible increases in future energy consumption.

There are of course some important, if technical details that might alter these round numbers, such as assumptions about capacity of energy generating technologies, gains in efficiencies in energy consumption between primary and final energy and assumptions about the overall energy intensity of the economy. So I encourage everyone to do the math themselves, and crucially, to ask politicians and policy advocates to present their numbers for the rate of deployment of carbon-free energy and the rate of decommissioning of current fossil fuel infrastructure.

We don’t often see these numbers for obvious reasons. The scale – no matter what assumptions one begins with – is absolutely, mind-bogglingly huge.

The world continues to move away from net-zero carbon dioxide emissions. In 2018 the world added more than 280 mtoe of fossil fuel consumption and about 106 of carbon-free consumption, according to BP. To move in the direction of net-zero, all of those additions (about 400 mtoe) would need to be carbon-free, while replacing and retiring about another 400 mtoe of exiting fossil fuel consumption. In a round number, the deployment rate of carbon-free energy would need to increase by about 800%.

Make no mistake, these numbers are sobering. They indicate in readily-understandable terms that the world, and the United States, are not moving towards net-zero carbon dioxide emissions and in fact, every day, we are moving in the opposite direction. Auctions of promises for emissions reductions don’t actually reduce emissions. Technology reduces emissions.

When you see an “auction of promises” in climate policy for emissions reductions, ask instead for rates of deployment of carbon-free energy technologies and rates of decommissioning of existing fossil fuel infrastructure. Then do the math, and see if it adds up.